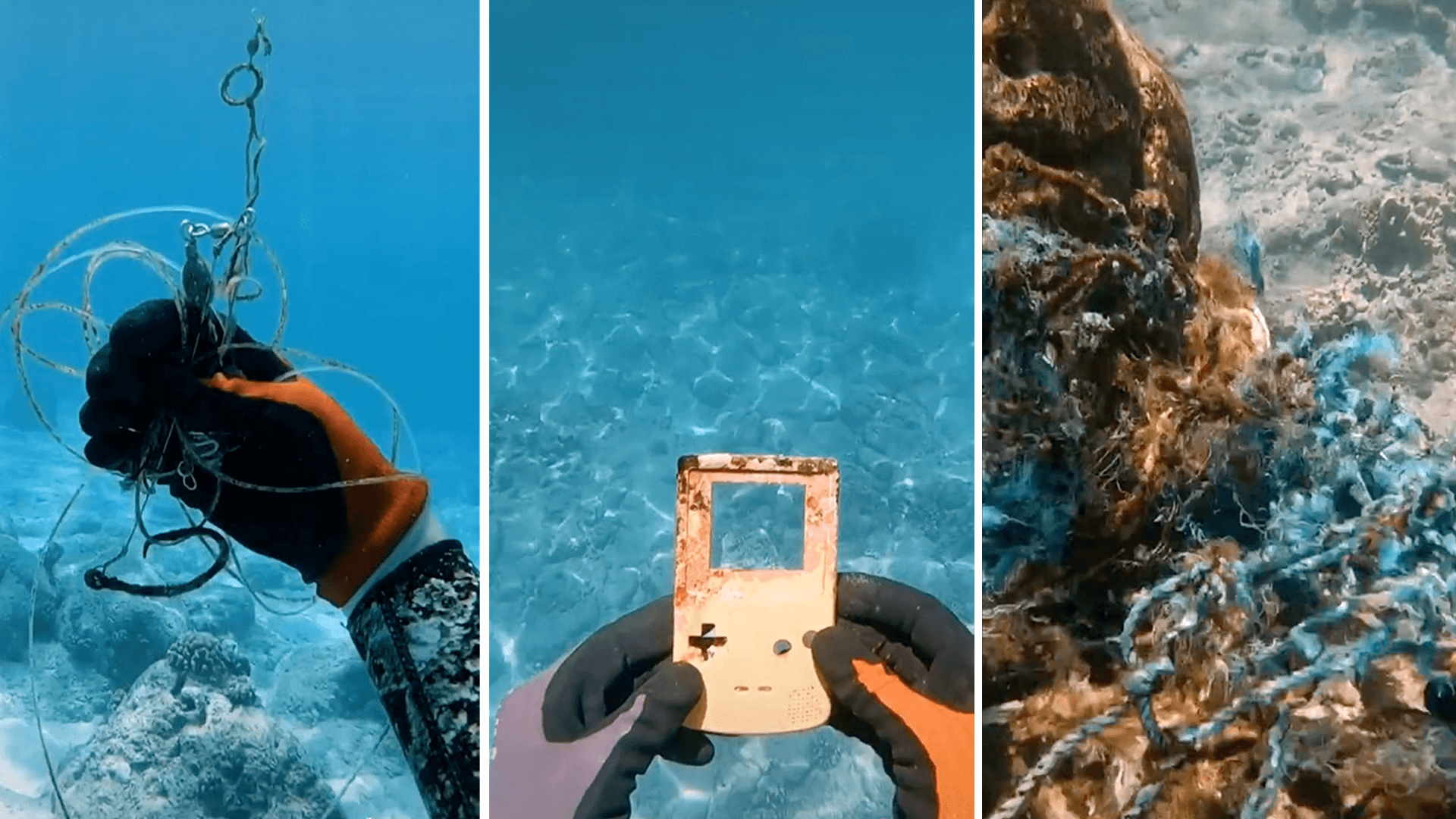 The self-proclaimed “CEO of the Ocean” is trying to help clean up his slice of the Hawaiian coast.

Shane Brown (@Shangerdanger) is known for his diving videos in which he and a group of friends scour the beaches and reefs of Hawaii for trash.

In one of his popular videos, Brown showcases goggles, nets, phone cases, cloth, fishing lines, and bits of a waterlogged Gameboy, all from a single diving trip.

In another, he digs through the sand, counting the number of hair ties he finds, explaining that he sometimes finds hundreds a month.

It’s easy to understand the passion that drives him and his friends on their mission when you look at the effect that plastic pollution has on Hawaii’s oceans.

These hair ties are making me ANGERY

The Hawaii Wildlife Fund alone collects 15 to 20 tons of ocean trash from the state’s shores every year, most from plastic fishing nets.

Hawaii has taken a strong stance on plastic pollution. It was the first state to ban grocery store plastic bags way back in 2015. The government has worked to clean up the single-use plastic culture of the tourism industry, but plastic pollution is still a major problem. Much of the plastic found along Hawaii’s coastlines doesn’t even come from Hawaii.

The islands are near the Great Pacific Garbage Patch, where plastic from all over the world collects and swirls with ocean currents. Lots of the plastic, some of it decades old, washes up on Hawaii’s beaches from this garbage patch.

About 46% of the Great Pacific Garbage Patch is made of discarded commercial fishing nets, which pose a serious danger to marine life, according to a 2018 study in Nature. Ocean animals get trapped in these huge nets and die, while smaller bits of plastic are eaten by animals that mistake them for food.

The microplastics eaten by marine life make their way into humans who eat fish. Scientists aren’t sure how microplastic affects humans yet, but plastic in the ocean isn’t good for anyone.

Brown knows that plastic trash isn’t the only harm humans have brought to Hawaii’s beaches. He recently posted a video in which he joined the Ambassadors of Aloha and the Sierra Club to remove an invasive species from Oahu’s coasts.

The Koa Haole, named for the foreigners who brought the shrub, is an invasive species that grows very quickly and spreads easily, taking the place of native Hawaiian plants like Naupaka and Milo, harming the traditional ecosystem.

Such a good day of work! Can’t wait for tomorrow

During the shore cleanup, local community leaders directed volunteers to pull up the invasive shrubs, while children spread Milo seeds in its place and elders taught lessons in plant identification.

It’s important to note that Brown often works within communities dedicated to protecting Hawaii’s ecosystem. These people, whether they are diving friends or local groups, have joined together to accomplish something beautiful.