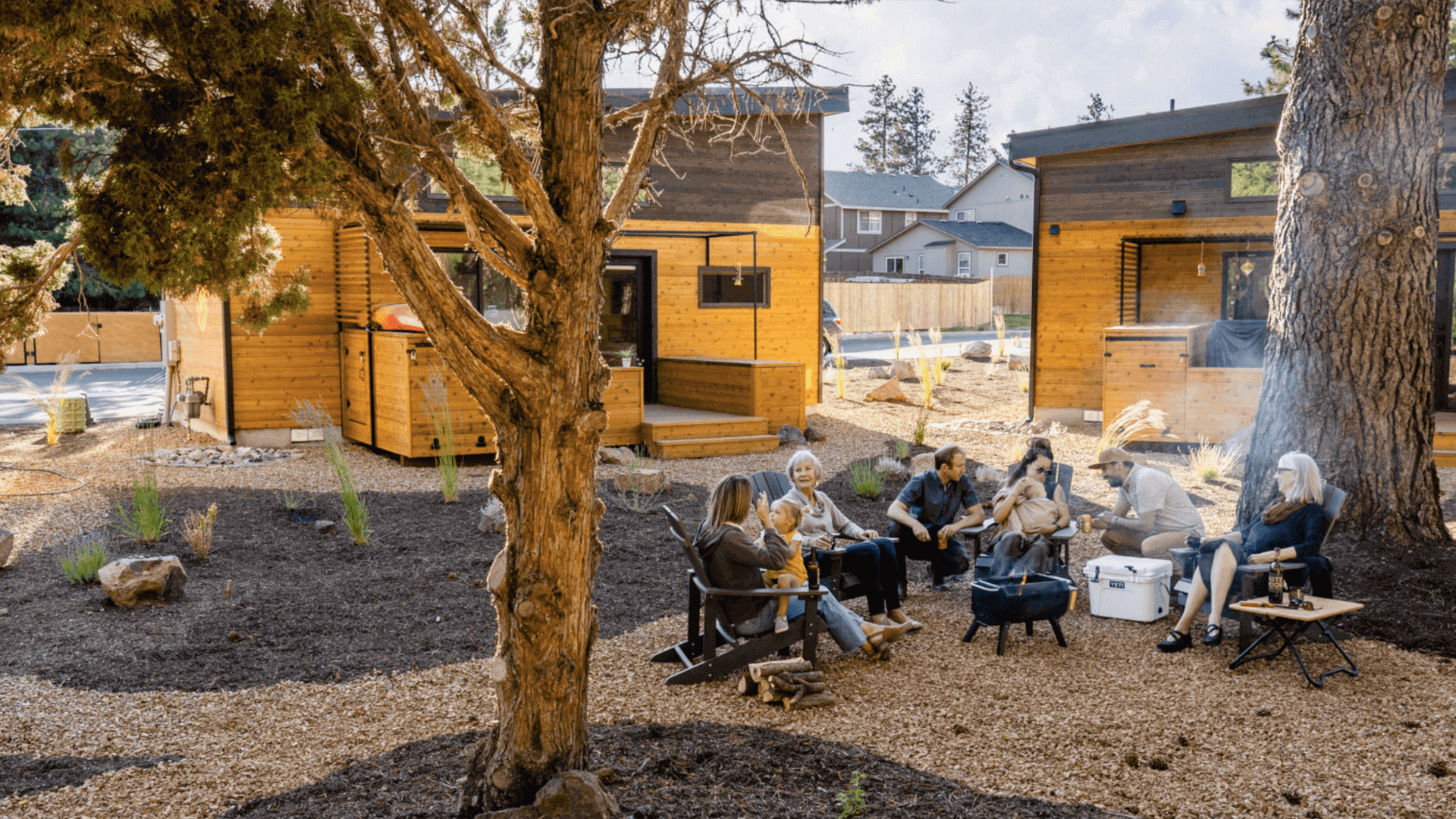 As a record surge in house prices shatters the dream of homeownership for an estimated 4 million Americans, one man’s big idea about living small is bringing back hope in Bend, Oregon and beyond.

Jesse Russell, a Bend native and former producer on shows like “Hell’s Kitchen” and “Nashville Star,” founded the energy-efficient home development company Hiatus Homes after living in fast-paced L.A., where working in the grueling television industry left him exhausted and with a deep desire to simplify his life.

In 2014, Russell first learned about the concept of tiny homes from FYI Network’s “Tiny House Nation.” He was attracted to the idea of small homes as a solution to both his desire to relocate and pivot careers, and to the desperate need for affordable housing in his hometown.

In 2015, Russell moved back to Bend and, with the help of a friend, constructed the prototype for his first small and efficient house, which he named “The Hiatus.”

Desiring to expand upon his tiny homes project, Russell sought help with construction financing, and was introduced to Ryan Andrews, a true expert in real estate development and the current CFO of Hiatus Homes.

Since then, the pair has developed two stunning energy-efficient and award-winning cottage-style developments, one of which is completely sold out –– and a third, apartment-style complex on the way.

Andrews and Russell say that Oregonians are realizing that smaller, more energy-efficient homes are one of the best ways to save money and fight the overheating of our planet.

“People like these homes because they care about energy efficiency. They care about good air quality,” Russell told The Cool Down. “For our customers, [less] square footage is a feature, not a bug.”

Hiatus Homes found that by decreasing the square footage of a residence, improving its energy efficiency, and equipping it with solar panels, the company could create homes that do not incur high energy bills or contribute as much to the Earth’s warming as a typical house would.

In addition to a Hiatus Home being on average 40% more energy efficient than a traditional household, some can also be upgraded to include larger arrays of solar panels, which can produce almost 7,800 kilowatt-hours of power a year. The Hiatus team calculates the amount of solar power that is needed to run each home to ensure it meets the “Zero Energy Ready” home requirements as outlined by the U.S. Department of Energy. To earn this distinction, a home must be at least 40-50% more energy efficient than a typical new home.

Across the country, Americans burn through far more energy than we need to live comfortably and sustainably, with the average household using roughly 11,000 kilowatt-hours every year, mainly derived from burning coal, gas, and oil. Anything that shifts our reliance away from these dirty energy sources and onto cleaner, cheaper energy like solar power can have a huge impact.

Although a Hiatus Home draws most of its power supply from the sun, Russell was quick to point out that this style of home can still exist in places without adequate sunlight.

“Even without solar, the homes are much more efficient and will be popular with anyone trying to reduce their carbon footprint or reduce their utility bills,” he explained. “You can still upgrade your windows and insulation — choose a heat pump hot water heater and seal the house to … make the house more efficient in areas where there is less sunshine.”

Rain or shine, the resulting energy savings on these homes are huge.

Hiatus Homes’ 40% increase in energy efficiency means residents’ electricity bills are far lower. One reason for the increased efficiency is that the houses are constructed with a special foam insulation that is GREENGUARD Certified, meaning that it also helps indoor air quality and minimizes exposure to chemicals.

Alongside this excellent insulation, the homes are sealed to stop polluted air and smoke from making their way inside.

Plus, there’s reason to believe that they’ll be easier to resell in the future. Zillow has recently found that homes with more eco-friendly features sell both more quickly and for more money.

Russell believes that as eco-friendly appliances like heat pumps and solar panels become more widely available and less expensive, the trend toward these types of homes will quickly increase.

“[Soon] there will be no reason not to build every home as green as possible,” he explained.

According to Andrews, energy efficiency is far from the only consideration customers make before committing to a tiny home.

“Every customer has a different list of priorities,” he told The Cool Down. “Almost everyone has energy savings toward the top, but whether climate or air quality or a minimalist lifestyle, is number two or three [on the list] depends on the customer.”

While some states along the West Coast may have a head start on getting energy-efficient homes, they have their own environmental problems, like wildfire smoke and drought. But the Hiatus team is aware that the future of housing must address all of these issues.

To deal with the ever-increasingly common wildfire smoke, Hiatus Homes are fitted with high-efficiency air filters, like the MERV 13 filter, which, according to Andrews, is a “powerful tool for getting rid of smoke” and fine particle pollution.

And to prove the effectiveness of these filters, the Hiatus team has used air quality sensors to show that the insides of their homes have healthier air than in the surrounding Bend community.

But as western states continue to struggle with the worst megadrought in over a millennium, Russell added that overcoming water issues will require changes on the policy front.

Housing policies on both the local and national scales aren’t necessarily aligned with what is the most sustainable. This is especially apparent with issues related to water conservation in the West. As rainwater is not always safe to drink without filtration and states often have water use restrictions, states like California and Oregon require citizens to jump through some hoops if they are to use their rainwater or recycle their gently-used wastewater.

“[Although] we have the ability to recycle our gray water, capture rainwater … this is not permitted in [much of] the U.S.,” Russell explained.

As water issues like droughts become more prevalent across the country, local and state governments may need to prioritize adapting codes to center on sustainable practices.

When lawmakers start asking questions on how to achieve a more Earth-friendly future for American housing, Hiatus Homes will be here with a super energy-efficient answer.

And a stylish, comfortable, and cheap one at that.