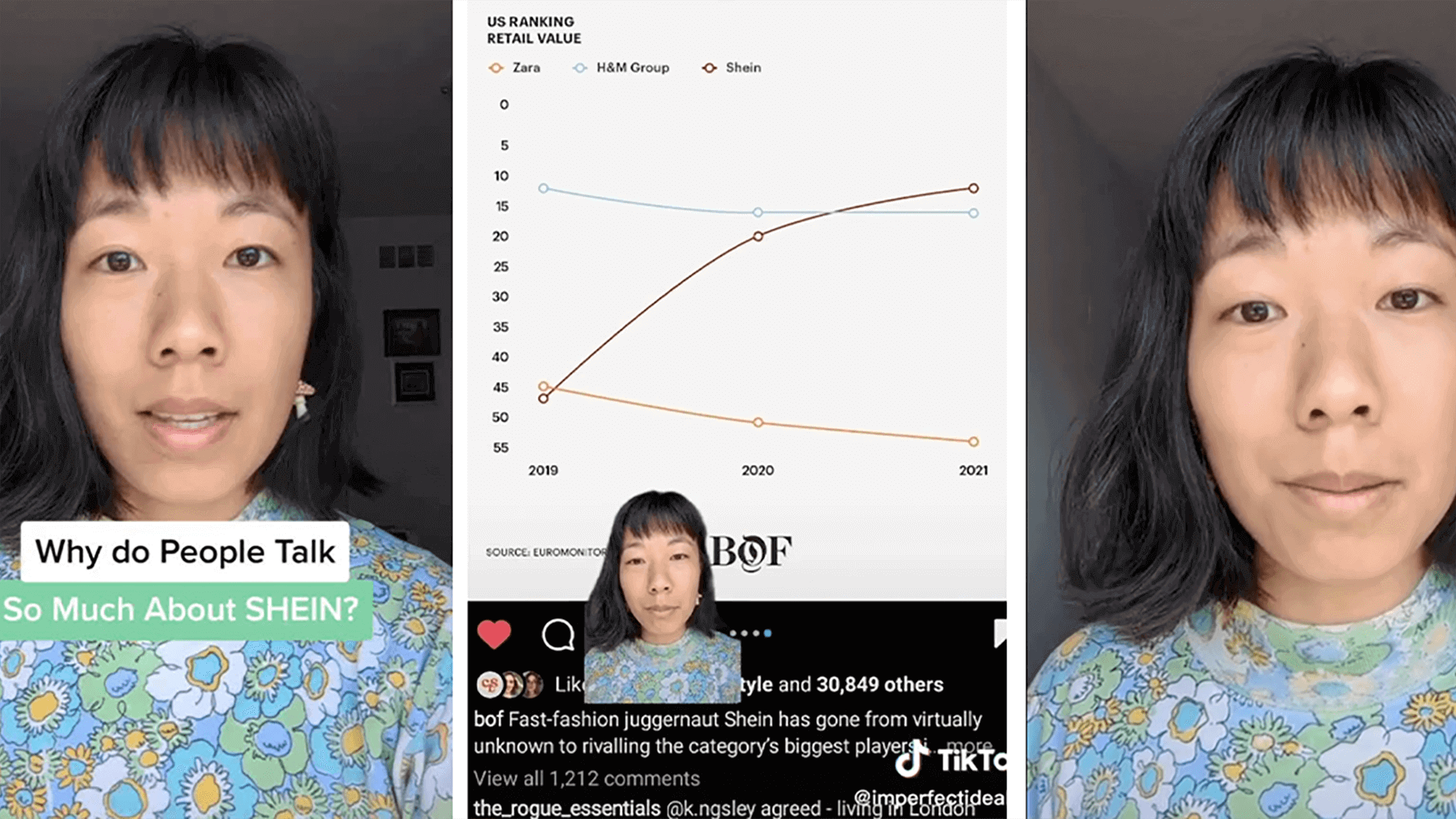 In a recent TikTok, Lily Fang perfectly explains why Shein differs from other fast-fashion brands.

Lily Fang, also known as @imperfectidealist on TikTok, is an internet personality that dedicates most of her content to slow fashion, or the idea of buying quality garments from responsible companies, while buying fewer items.

Fast fashion describes the exact opposite. It’s a model for clothing companies that mass-produce trendy, low-quality clothing at the lowest cost possible, endangering workers and the planet.

In her video, which has since racked up over 1.2 million views, Fang asks, “Why do people talk so much about Shein but not other fast-fashion brands?”

To illustrate her response, Fang uses graphics posted in a carousel by Business of Fashion on Instagram.

She displays a bar graph comparing the number of items popular fast-fashion brands like H&M Group, Zara, Boohoo, and Shein add to their U.S. websites annually.

“Shein is on a scale of its own when it comes to production,” Fang explains.

Fang explains that Shein is in a league of its own regarding overproduction because it produces many more styles than its rivals. Shein is a behemoth compared to its rivals, making it an ultra-fast-fashion brand.

The second graphic Fang shows is a line graph depicting the ranks of the retail value in the U.S. of H&M group, Zara, and Shein from 2019 to 2021. This data shows that the ranked retail value for Shein in the U.S. was lower than H&M Group and Zara in 2019 but quickly surpassed both rivals in only two years, making Shein one of the top clothing retailers in the U.S.

“It has outpaced Zara and the entire H&M Group in sales in the U.S.,” Fang remarks.

Using a report on Shein conducted by the Public Eye, Fang explains that Shein exhausts its workers with 75-hour work weeks in unsafe working conditions to reach its outrageous production goals.

After explaining why so many argue that Shein is the worst of fast-fashion brands, Fang switches gears to add some nuance to the conversation.

“Keep in mind that when people criticize Shein, it is not a dig at people buying it out of necessity,” she clarifies. “Shein could not be as hugely successful if its customer base is only poor people or people buying mindfully. The issue is when people buy massive amounts of clothing, give Shein free advertising with their hauls, and barely wear the clothes.”

A post shared by The Business of Fashion (@bof)

An overwhelming majority of commenters agreed with Fang, with many admitting to being recovering fast-fashion shoppers.

“Yes! I used to buy from SheIn when I had less money, but realized it was costing me a lot. Bad quality and expensive shipping,” one user wrote.

“Why do people continue to forget that the consumers have power?” wrote another. “You can live without all the micro trends and massive Shein hauls every month.”

One user mentioned another reason Shein gets so much hate, which is stealing designs from other shops, and had made headlines many a time for ripping off small businesses and POC-owned brands.

“Shein is also notorious for stealing boutique and other wholesaler pictures and then people will accuse boutiques of buying from Shein and reselling.”

Im SO over these major brands stealing from black designers. @SHEIN_official STOLE my @sincerelyriaxo designs to a T. They couldn’t even change ONE thing and it’s now one of their highest selling items. They even stole the brands aesthetic. Like Come on pic.twitter.com/ose8DiM9hK

It can’t be ignored that one major reason fast fashion is so popular — beyond low prices — is size inclusivity. As one user commented, “Shein is one of the only stores where the plus size section is equally as cute as the straight sized section. So I get things I need.”

Retailers have long been known to ignore plus-size consumers, providing them with limited options and styles, and fast fashion has proven to be a solution for shoppers who have been neglected for so long.

As Fang notes in her TikTok, no matter where you buy and for whatever reason, the best thing you can do in terms of fashion is “always buy less and make it last.”