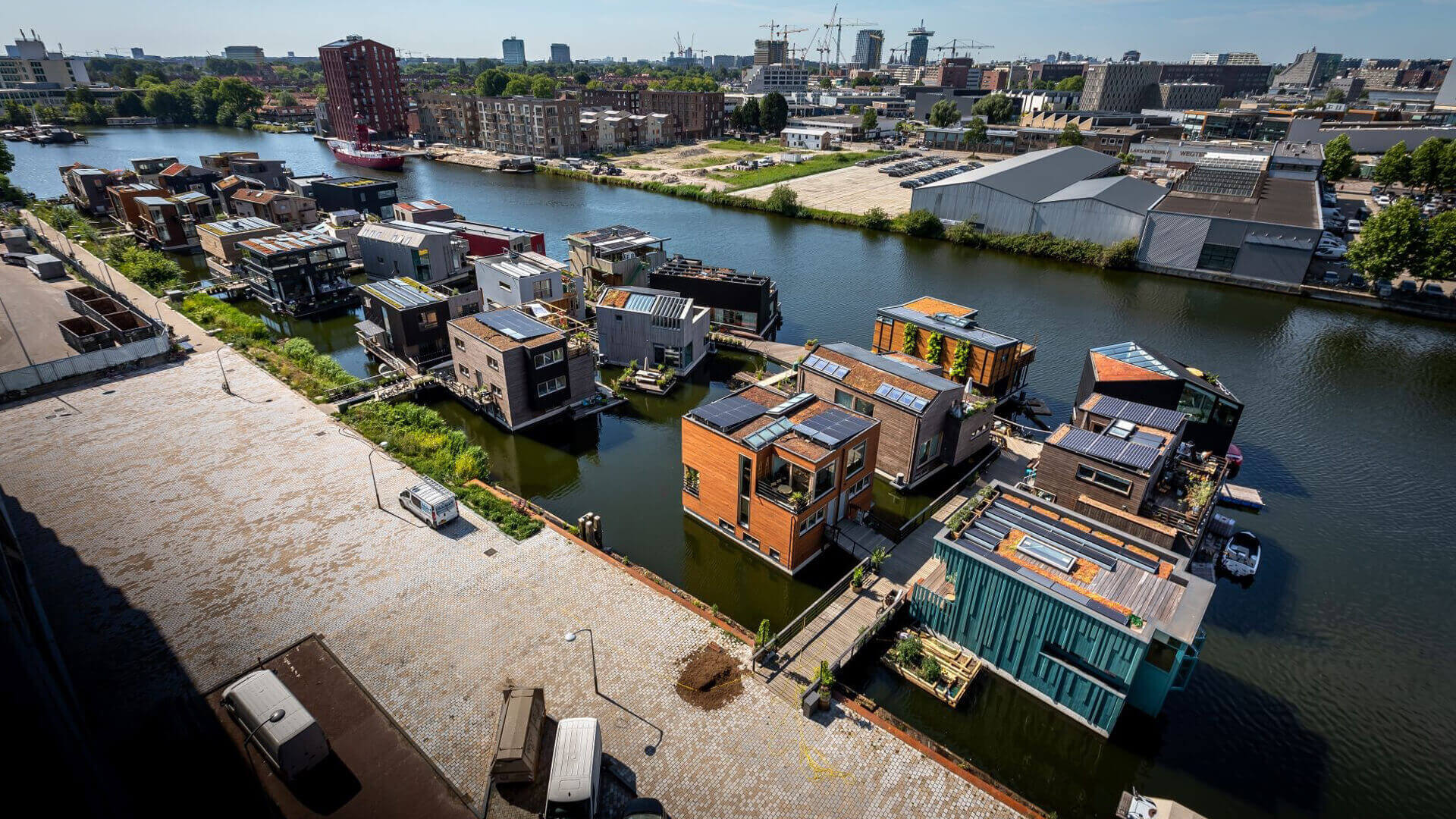 Oceanfront property is all the rage, but as sea levels rise, those investments may end up sinking. That’s why communities like Schoonschip, in the Netherlands, are investing in floating neighborhoods — so encroaching tides don’t spell the end of coastal living.

Amsterdam’s Schoonschip set out to be “the most sustainable floating neighborhood in Europe.” Developed over 10 years, the last house was finalized in 2020.

Holding 46 households and 144 people, Schoonschip has become home to a wide variety of eco-conscious residents.

Dutch firm Space & Matter worked with future residents to design much of Schoonschip, though an assortment of architects drew the individual houses. Thirty houses — 15 of which are duplexes — and a small community space float in a canal. All of them are connected to the shore by a jetty, or small pier.

Along that jetty runs offshoots of the local sewer system and power grid. Each house rises and falls with the waters, thanks to steel pillars buried deep into the ground. The community is only a short ferry ride to the center of Amsterdam, and residents have access to communal electric cars and bikes as other means of transport.

What makes Schoonschip so sustainable?

Schoonschip was created as a response to our overheating planet, so it makes sense that it runs as sustainably as possible. Many of the houses were prefabricated, meaning they were produced in factories and assembled on site, a process that cuts down on construction time and waste.

The community draws its energy from 516 solar panels, 30 heat pumps, and 60 thermal panels. Residents also have a “smart grid” that allows them to sell excess energy to their neighbors or back to the city.

The Netherlands is wise to prepare for rising seas. Yale School of the Environment reports that a third of the densely populated country lies below sea level. Couple that with a nationwide housing shortage and a government program that plans for strategic flooding, and floating houses seem like a clear, elegant answer.

As an example, Schoonschip is a big deal. But by acreage, it’s pretty small. There are other, similar projects popping up around the world with some plans calling for massive, floating cities.

In the Maldives, there are plans for 20,000 affordable, floating homes, while the Baltic Sea may someday hold 30,000 people on floating islands.

Building these projects won’t be easy, of course. It’s difficult to overcome years of housing tradition, even in the face of rising environmental pressures. Some researchers also worry about the impact a floating city may have on an ocean’s ecosystem.

The changing climate brings great challenges to coastal communities, including more frequent extreme weather events, tidal flooding, coastal erosion, economic disruption, and losses of life. All of these dangers are hurting vulnerable communities at disproportionate rates and are already driving displacement around the world.

Floating homes are one way we can build more resilient, sustainable communities and stay above water.