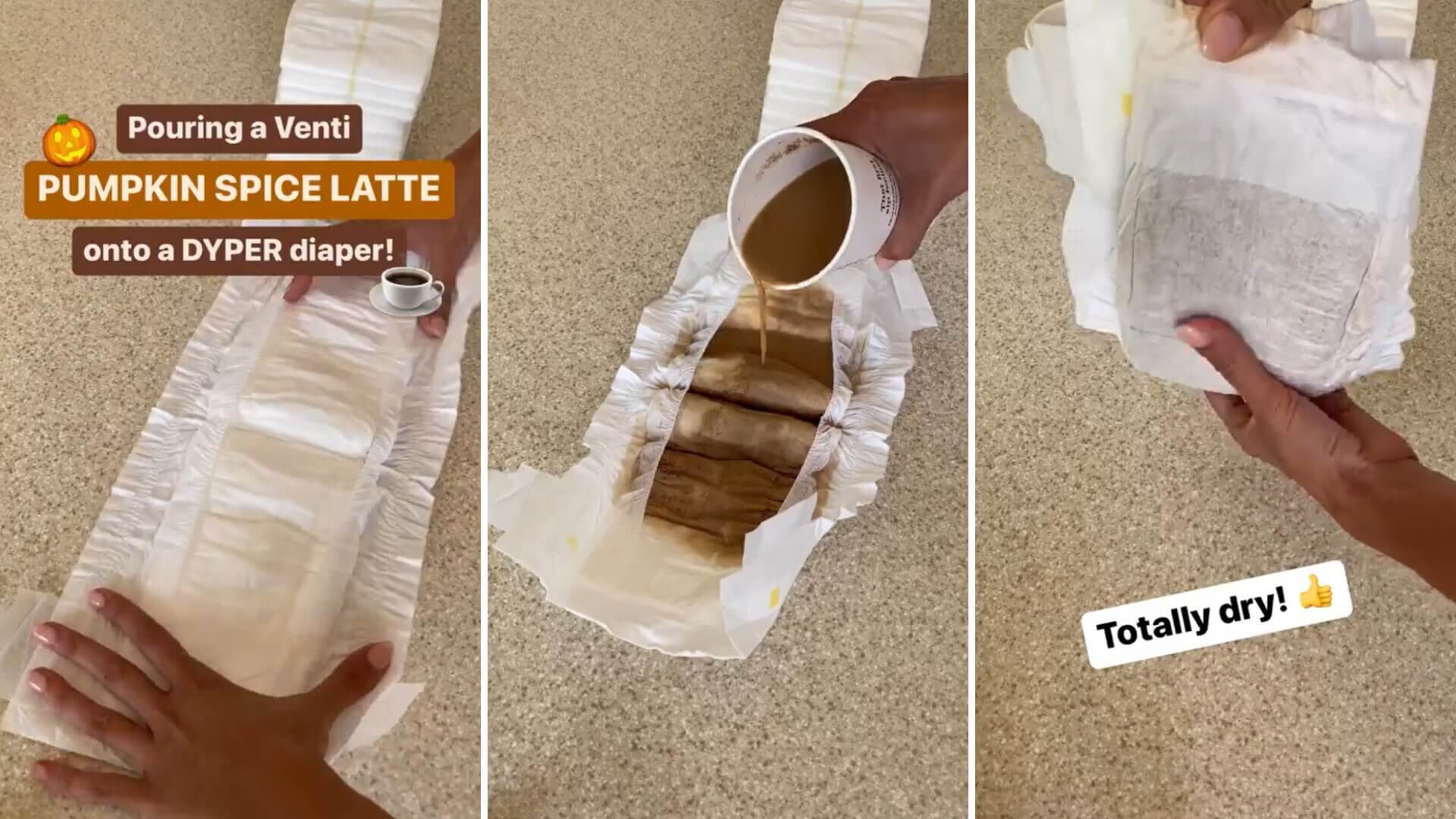 Plant-based diapers are just as absorbent as plastic disposables, as proven by eco-friendly brand Dyper in a viral Instagram reel.

No parent wants to sacrifice reliability when it comes to their baby’s hygiene, even if it is for the planet. And with Dyper, it looks like they won’t have to.

In the video, Dyper’s demonstrator spreads one of their sustainable diapers out onto a kitchen worktop before pouring an entire Starbucks venti pumpkin spice latte onto the absorbent material. When they lift up the diaper at the end, not a drop is spilled. It’s completely dry on the outside.

An average 22 to 37-pound baby produces six ounces of urine over four hours, while a Starbucks venti hot latte is 20 ounces.

More than 300,000 diapers are sent to landfills or incinerators every minute globally, according to a recent report from the U.K.’s Bio-Based and Biodegradable Industries Association (BBIA).

That adds up to around 7.7 billion pounds of diaper waste every year, which can take over 300 years to decompose.

Diapers are also a major pollutant in our oceans. Single-use plastic diapers are estimated to make up one-fifth of Indonesia’s massive marine pollution problem.

But it’s unlikely that we’ll solve the world’s diaper problem with reusables. 95% of parents in the U.S. are thought to prefer disposable diapers because of their convenience, reasonable cost, comfort, and good hygiene.

Compostable diapers could be the solution, so long as they are disposed of properly. Most biodegradable diapers, including Dyper’s, still include some plastic, and many end up in landfills despite their green credentials.

Dyper is attempting to rectify that with their REDYPER™ service, which offers curbside pick-up for dirty diapers in 21 cities, including New York, Los Angeles, and Nashville.

The company then either composts the diapers or uses a process called pyrolysis to transform them into a charcoal-like soil additive called BYOCHAR™, which sequesters carbon dioxide — a big contributor to the overheating of our planet — for over 2,000 years.

About 55% of each diaper is made out of bio-derived material, specifically bamboo and eucalyptus, in an attempt to reduce the diaper industry’s reliance on dirty fossil fuels.

Dyper claims to have saved 10 million pounds of diapers from landfills already.