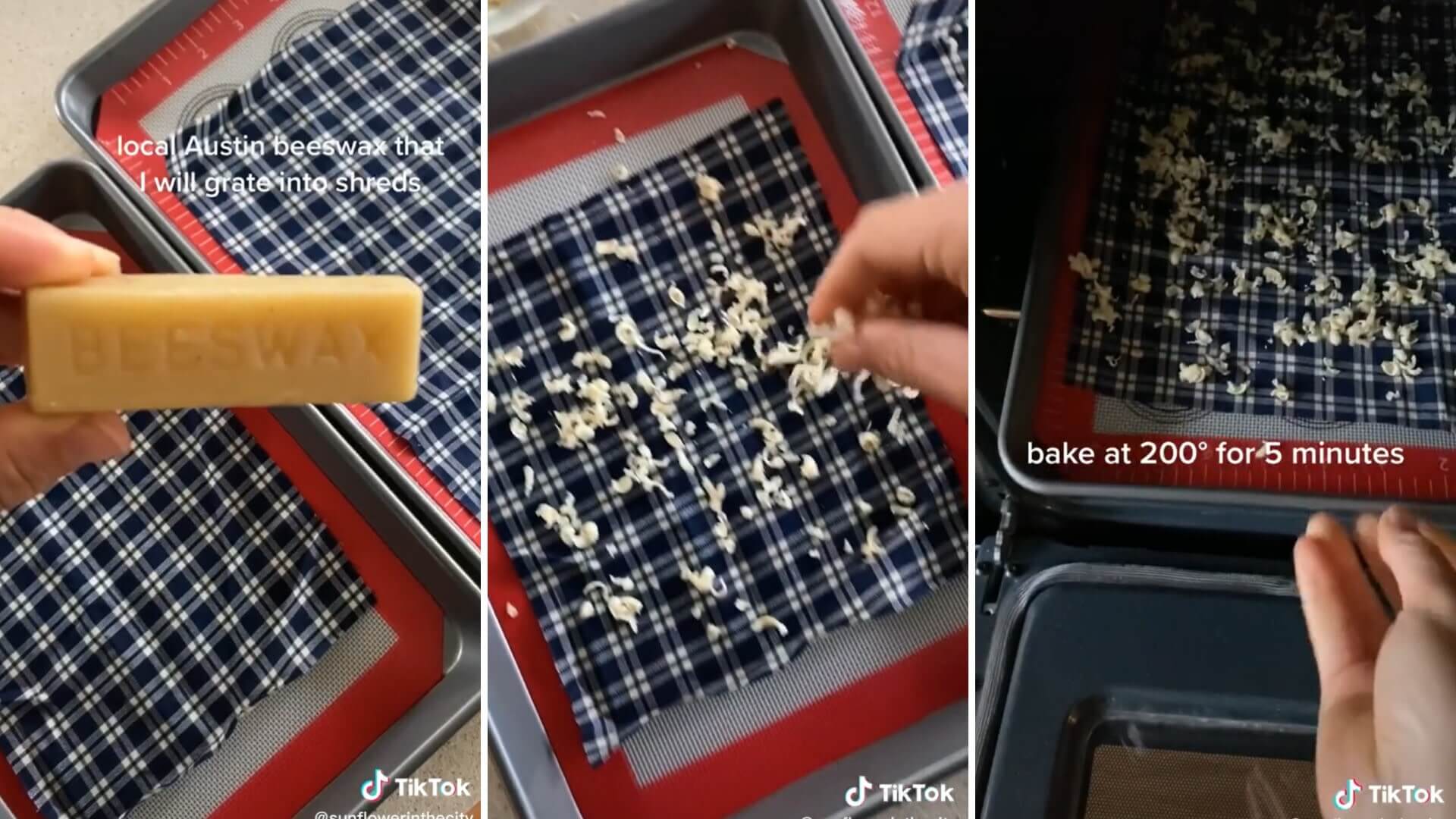 It’s almost an automatic movement: You’ve just finished dinner and are getting ready to put away those delicious leftovers, so you reach for the plastic wrap.

But one TikToker has a different idea. In her viral video, TikToker Katie Anne (@katieanne.w) shows the world how to make reusable, DIY beeswax wraps.

The video, originally posted by user @sunflowerinthecity, shows how easy it is to make a sustainable, money-saving alternative to single-use plastic wraps.

Katie starts with a few squares of 100% cotton fabric, which she places onto silicone-lined baking sheets.

Next, she grabs a square of beeswax, sprinkling it on one side of the cotton after seemingly shredding it with a cheese grater.

She then cooks the squares in the oven at 200 degrees for five minutes. After removing them, she flips the fabric over and sprinkles the other side with more beeswax. She then pops the fabric back in and bakes it for another 5 minutes.

“Sometimes the wax doesn’t get all the way to the edges so you can sprinkle a little bit more on and pop in the oven as needed,” Katie says.

After baking, Katie hangs and dries the fabric for two minutes. And then, voila! An eco-friendly alternative to plastic wrap.

“These can be used for anything. They will fold together with the heat of your hands,” Katie says as she demonstrates wrapping a peach, folding the fabric, and molding it into place around the fruit.

One cool thing about these beeswax wraps is that you can wash them with water and use them over and over again. Over time, the savings can add up as you’ll avoid buying disposable plastic wrap.

“Say goodbye to plastic, people. This is what’s up,” Katie says in her video.

And of course, beeswax wraps are more eco-friendly. Plastic is a major issue on our planet, from overflowing landfills to garbage islands in the oceans to microplastics making their way into the food we eat. This hack helps reduce that waste.

The viral video, which has more than 625,000 likes, got a variety of responses. A few expressed concern about using beeswax, as it is not vegan.

“I would but I’m vegan and I don’t use beeswax,” said one commenter.

“Is there a vegan alternative where I don’t have to use beeswax?” another asked.

But many TikTokers were enthusiastic to try the hack.

“Thank you so much for this video!!! I didn’t know it was so easy to make these at home! I just ordered some beeswax so I can do it myself :),” one user wrote.

“My parents have a huge bee farm. I know what I’m making now,” another added.